On Tuesday 1st October our new Centre was officially launched. A number of very eminent philosophers and theorists of history had agreed to give short papers and participate in a Q&A session, but before the talks began there was time for a sandwich lunch and some refreshment. At 1pm after some introductory words by Head of the School of Arts and Humanities Prof Lance Pettitt and myself, the event began with a fascinating paper by Prof Alun Munslow. This was followed by a Q&A session where Alun and Prof Keith Jenkins expertly fielded a variety of questions asked by the audience including some by our students. 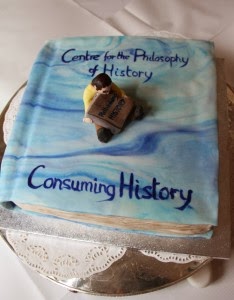 There was then a short break to cut the cake (expertly iced by Pauline) after which Dr Glenn Richardson awarded Graeme Ancient the Kenneth Breen Memorial Prize for History. We were pleased that the winner of the prize in 2012 (Sam Spranger) and the 2013 winner Graeme were both present at the launch. In fact the participation in the day by so many of our students was a highlight for us. The day concluded with very interesting papers by Martin Davies and Prof Nur Masalha who from different perspectives explored the intersection of politics and history. After the official close of proceedings a number of us retired to the Dolcé Vita Cafe for more cake and animated discussion. We would like to thank everyone who not only made the day such an enjoyable event, but also those people who have provided guidance and support in the establishment of the centre. 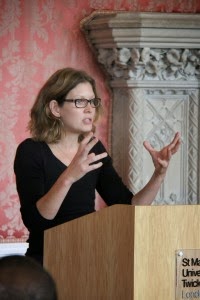